When I read this quote I ‘clicked’ immediately with these words; even more since I keep saying that I enjoy painting pictures with words. In my writing exactly that’s what I try to do, even though I’m not always sure it works the way I had planned it.

My back was turned to the door. While I waited for his return, I watched the sparrows playing on the fountain rim while taking quick showers in the droplets which sparkled in the bright afternoon sun.

seems to be better than:

I stared outside waiting for his return. The afternoon sun made the water in the fountain basin sparkle.

I would like the reader to see the sparrows hopping around, rant and rave at each other and still spread the feeling of happiness and joy. 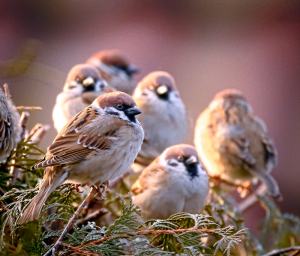 I figure we all had looked out a window once when the weather was beautiful and saw some pond or fountain. Sparrows are almost everywhere, but most of us don’t see them anymore, maybe because they are ‘ordinary.’

Of course, this is only one example of many. I am fascinated by waterfalls in the mountains and I know I’m not the only one. But how many of us see the rainbow over the water in summer, how many see the snakes, turtles, and lizards which can be seen enjoying the sun while still trying to catch the droplets the waterfall bestows on them.

Many people like going for walks. But it seems to be very important to them to permanently stare onto their phones or have someone with them to talk to.

That way they miss the sound of Nature, they miss so many beautiful details.
When I go through the forest, I try to set my steps as quietly as possible as compared to breaking through the woods like a rhinoceros. I watch the sunbeams touching the moss between trees; I listen to the birds singing, I can see the finest art in the form of spider webs between the bushes (and yes, I walk around them. As beautiful as the webs are, the residents scare me to death).

I have the chance to see foxes, squirrels, and deer. One evening I had the chance to watch a huge owl feeding the brood, and I’m still honored to have had that chance.

All these details taught me how to see. And that is what I try to express in my books. Of course, I still work on it, and I’m sure at times it can be better. But I won’t give up.

How is your experience with descriptions and the painting of pictures with words? Let me know in the comments below.

Anton Pavlovich Chekhov was born on January 29th in the year 1860, in the small seaport of Taganrog, Ukraine. He is regarded as one of Russia’s most cherished story tellers. He has produced some hilarious one-acts, but his tragic stories have gained him the name of being one of the major dramatists. Today, he is remembered as a playwright and one of the masters of the modern short story. He was the grandson of a serf and the son of a grocer, whose religious fanaticism caused much of his early years to reside under its shadow. While he was doing medicine in the University of Moscow, he began writing short stories. After graduating in 1884, he worked as a freelance writer and journalist related to comics. He used the money gathered from it to support himself and his family, and by 1886, he had gained wide fame as a writer. Chekhov’s works were published in various St. Petersburg papers, including Peterburskaia Gazeta in 1885, and Novoe Vremia in 1886. The Shooting Party published by him was translated into English in 1926.

In the early part of his career, he mastered the art of one-act and produced some fine pieces. In 1888, he wrote a story, The Bear, in which a creditor pursues a young widow, but later proposes marriage to her after being impressed that she’s agreed to fight a duel with him. In 1889, he wrote The Wedding, which also has a very nice story attached to it, and became an instant hit amongst his fans.

In 1886, he began contributing regularly to St. Petersburg daily Novoe Vremia and that was when he developed the style of calm writing. He was criticized by his opponents because his story lacked social commentary, but at the same time, he was praised by authors such as Leo Tolstoy and Nikolai Leskov.
In 1888, Chekhov was rewarded the Pushkin Prize and the very next year, he was elected a member of the Society of Lovers of Russian Literature. He withdrew from Literature and turned to Science for a while when his play, The Wood Demon failed in 1889. As a part of his doctoral research, he made a trip to the penal colony of Sakhalin, north of Siberia, where he surveyed 10,000 convicts sentenced to life on the island. During the latter half of the year, he traveled all over the word, including places as South East Asia, the Indian Subcontinent, and the Middle East.
In 1901, Chekhov finally married an actress, Olga Knipper, who had performed in his plays. On July 15, 1904, in Badenweiler, Germany, Chekhov died. He is buried in the cemetery of the Novodeviche Monastery in Moscow. (Source: https://www.famousauthors.org/anton-chekhov)