While working on ‘The Council Of Twelve’ series, I built character by character, developed, considered their look, decided who they are and in what direction they would head within their story.

But also, I was ‘creating’ their look; dark hair, blue eyes, black hair, bronze eyes, tall, muscular, petite, almost ethereal. I will deliver many descriptions while ‘The Council Of Twelve’ series progresses.

In my head, the characters and their personality formed together with their look, and while creating them, I didn’t consider any consequences – like the book cover to the story.

Let me give you an example:
Katie is a breathtaking beauty with caramel colored hair and brown eyes; her cream skin makes her look almost fragile.

To find ‘Katie’ I was busy looking through hundreds of pictures on several websites. In a way, it was an exciting task, and my excitement grew with every picture. But after a while I got slightly bored, my hope slowly dying that I would find “THE” Katie… the woman I had created in my head.

I wish I could say, ‘suddenly’ I found her, just as she was in my fantasy… but the fact is, I didn’t. Katie was not one of the models, but the Model I found has caramel colored hair and is stunningly beautiful. I set the first mark on her picture. Whenever I discovered a model who got close to her beauty or my description, I tagged her. In the end, I compared all the models and by process of elimination, I ‘rejected’ one model after the next until I got ‘my Katie.’

I took some time to get used to ‘combine’ my fantasy with the model and then went through the different pictures of the model. Finally, I picked the one that’s on the cover now.

By now that’s ‘my Katie’ on the cover.

I was talking with my cover designer about the cover. I could deliver her Katie, but what about the rest of the cover? The man, the background, the font? I’m lucky to have a cover designer who knows her stuff. I informed her that I couldn’t go through the model search again. I wanted some mystery, some secret.

I wanted something different; a man every reader can connect to, and has the chance to create the character’s look in their own fantasy. And my cover designer found the solution. I’m very proud of the ‘Soul Taker’ cover.

Since the second book in the series is completed and only needs to return from the Copyright Lawyer, we had to get together and discuss the next cover.

Believe it or not – I was sitting on the monitor and dully clicked through hundreds of pictures.

Let me tell you – the thought of ‘The Council Of Twelve’ series is planned to contain 13 books, scares me.

How are you designing your covers? At what point do you start considering what should be on the cover, and if you have cover models – how do you pick them? Let us know about it in the comments. We’re curious. 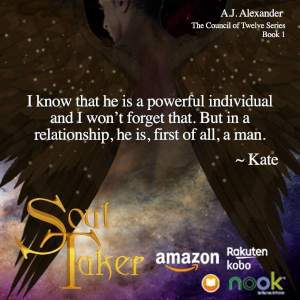