Writing a fiction novel, staged in 2021 in Southern California is completely different from writing Young Adult fantasy. I had planned to create a main character who is not perfect, to not only extend the tension within the story, but also, because it’s important for the entire plot.

That means, I literally created a flawed protagonist. Flawed, but still sympathetic; imperfect, but still loveable.

I read plenty of books where I enjoyed reading about flawed characters. Some of them have dark secrets that are revealed. I didn’t want my protagonist to be perfect! Far from it… but then, that particular dark secret is a crime. How much of a disadvantage is that for the story?

There are quite some flawed famous beloved characters in history:

Elizabeth Bennett, protagonist in ‘Price and Prejudice’. She’s loveable, an independent and proud woman of her time (within permitted limits)… but she’s prejudgemental and a bit too arrogant at times and needs to work on herself to correct her. Do we love her less for that?

John Blackthorne, protagonist in ‘Shogun’. He’s good looking, even though the Japanese protagonists within the book call him ‘Barbarian’. He is highly intelligent, a strong and resilient character… but he sacrificed his entire ship crew except seven or eight of them, to fulfill his need for adventure, and he cheats on his wife. Do we love him less?

Indiana Jones. Our hero, our fighter for the good, against an entire military-power behind the ‘Fuehrer’… He loses as many times as he wins, but he would never give up. He’s flawed, vulnerable and still we love him.

John Wick – an absolutely deadly assassin, who comes out of his retirement to get back to the ones who killed his dog. He mows his opponents down by the dozen again and again – and still, we would do anything to keep him alive.

There are many more examples, but I’ll leave it up to you who you would add to the list. (Please, leave your favorite flawed hero in the comments, I’m curious)!.

But can we love a criminal character? What is it that makes our character interesting? The flaws, the humor, the mood, the attitude… but a crime?

Now, am I crazy to worry about that? Without the crime there would be no story, and still I ask myself, ‘what is everyone going to think about this protagonist’? Will the readers still love that character as much as I do? Oh yes, I grew up like that, always considering how things look like to others. But in my book; in my story? (Yes, I know, talking about crimes and John Wick, it might seem a bit narrow-minded to worry about my little character and story. But I can’t help myself. It’s my work, and it’s upon me to tell the story, right?)

Let me know your thoughts on a flawed protagonist.

Characters are critical for stories that resonate. Why? Because characters are the conduit that connects the reader and vests them in the story problem. They’re the emotional touchstone that allows for catharsis, because—when written well—it doesn’t matter if the character is a space alien or a federal agent, we (readers) can relate to them in some way.

We can’t empathize with technology, spaceships, magic, or nuclear submarines. Humans can’t bond emotionally to a place (without the characters as the connection).

We cannot have story without characters and can’t, conversely, have characters (DIMENSIONAL characters) without story.

***I know we’ve talked about all this before, but since I am pathologically honest, I feel the need to tell on myself. I cracked a back tooth and had major dental work last week. With all the drugs? I actually have a completely new post almost finished, but it’s been like pulling teeth…bada bump snare.

So please forgive the refresher.

In August 2019 I published a post about a group of actors who I would pick for my ‘Council Of Twelve’ characters. At that time the only known consort was Katie, who I included in the list.

Today, May 2021, almost two years later, four books are published, and even though I introduced three consorts to the readers, there are couple more characters in these books, who I’d like to turn into a known face.

Let’s see, why not introducing the characters by book?

I know, compared to the other post, where I tried to find actors for ‘The Council of Twelve’, I had a few characters more than here. But with the growth of the series, I promise, I will extend this list. (And you never know, I might exchange the one or other actress or actor. We will see.

If you read the book, do you have any better suggestions? Fire away here in the comments. I’m prepared!

Thank you, Andre Clayton for a great blog post about naming our fictional characters. We all have been there. And for all of us it’s always interesting to find out how other authors are doing it!

on The Write Life:

When you start writing your story, how long does it take you to come up with character names?

Choosing the perfect name for your protagonist and antagonist can take ages, especially when you’re not sure how to start.

I’ve been there. After wasting days staring at a blank computer screen, attempting to come up with names for all of my characters, I developed with some helpful naming strategies. And I’d like to share them with you!

Lucy Mitchell informs us how to survive with too many fictional characters living in our heads. Thanks, Lucy.

It’s not easy being a writer. We find ourselves drawn to tweed based outfits, berets, Twitter, book shops and attractive notebooks. We stare into space a lot, walk around with pencils permanently tucked behind our ears, get excited over word counts, cover our walls in post it notes and lose ourselves while reading books.

One of the many problems we face is that our fictional characters can multiply inside our head at an alarming rate. Writers often talk about too having many new story ideas but for some of us (me included) it’s too many new characters.

Once a writer has caught the writing bug; written several stories, have a story they are working on and be entertaining a few new story ideas on the side, their head can sound more like a railway station at rush hour.

Louise Harnby published a fascinating article about the emotions of non-viewpoint characters and how to show them without screwing up. Thank you, Louise! 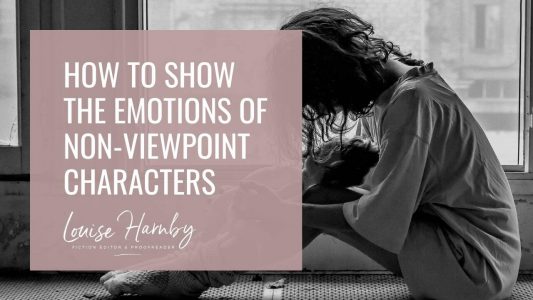 Non-viewpoint characters have emotions too.

But how do we show them without head-hopping?

Don’t we all wish sometimes we could just tell the truth instead of juggling tactfully around saying what the other one would like to hear? Let me give you a few examples.

Imagine, a hair salon, somewhere in a big city… the walls are covered with breathtaking hairstyles on equally breathtaking people, the hairstylist expects his next appointment.

A customer enters and points to one of the pictures on the wall, telling the hairdresser: “I want exactly that hairstyle here.”

Now, what does the hairstylist want to say? “Well, I’m afraid, that is a misunderstanding. See, this is a professional model, a really beautiful human being. Whereas you are a caprice of nature… barely to look at.”

What does the stylist say eventually? “Aaawww. What an excellent choice. That cut will frame your face wonderfully. I’m convinced it will look splendidly on you.”

Or, let’s have a look at another example:

Parents are invited to a parent’s conference day, and they’re meeting their kids’ teacher.

Imagine what the teacher would like to say: “Ah, yes. Your son Willy. A complete idiot. About as intelligent as six feet of dirt track… I’m surprised how this child finds the door in the morning to leave the house. My advice to you: set him free; start from scratch.”

What does he say? “Your son. He is intelligent but does have a few difficulties to focus and concentrate. There are practices and exercises to improve that. But I’m convinced the older he gets, the easier it will be for him…”

Or, how do you tell parents that their child is not the cutest on earth? Ask them for a picture. Then you study it for a few minutes and say: “Aha… hmm… you know…. are you sure that this is indeed the face?”

Of course, our society does not accept the naked truth. We all know words can hurt, and we don’t want to hurt people, nor do we want to be hurt. That’s when our ability to successfully veil our replies in conversations, create our answers in a way to compliment the other person, and hide what we really think.

At this point, I admit, it is a relief at times, to use my characters to speak what ‘they’ think, and of course, use them to write what I think. I rarely refer to a particular person or situation. But I permit my characters at times, to be as outspoken, open, bold, and sometimes rude, as I would never dare to be in public.

At times I wonder, if crime authors use their books to ‘kill people’ they don’t like in real life.

What would you permit your character to do what you cannot do or say in your real life? Let me know in the comments, I’m curious.

Thank you very much, K.M. Weiland,  for this very interesting POV on POV Extra Characters! I really appreciate the article. 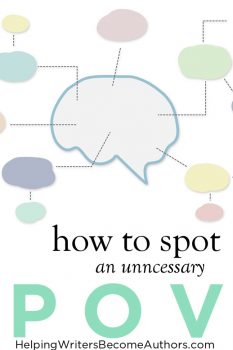 Sooner or later, most authors find the constraints of POV frustrating. It can be difficult to observe the strictures of a tight POV while still showing readers all of a scene’s necessary information. Seemingly, one of the easiest ways around this problem is to simply add a new POV from a character who is able to share the information you want to convey.

However, it’s always wise to think twice before adding another POV character.

Anne R. Allen informs us on her blog about four newbie writer mistakes that can derail a great book idea. Thanks for your information on that, Anne.

You’ve got a fantastic idea for a novel. It’s been hanging around for quite a while, knocking inside your noggin. The idea keeps saying, “Let me out! Release me! Put me in a book!”

Maybe there’s a scene in your head that plays like a video, with every detail of the setting right there, as if it’s on a screen. You know those characters. They’re like real people to you.

But you’ve never had the time to write it all down.

So here you are, finally banging out that scene. And another. And pretty soon you’ve written 10,000, maybe 15,000 words of brilliant, deathless prose. It almost wrote itself. Wow. That was almost too easy.

It IS brilliant, isn’t it?

Well, maybe not. Maybe what’s on the page isn’t quite as good it seemed when you were in the zone.

In fact, it could be terrible. What if you have no talent for writing at all? Maybe you should be in the living room doing that kitten jigsaw puzzle with Grandma instead. How do you know if you’re any good?

You’ll have to ask somebody knowledgeable. Like a published author.

And this — this is when you fall down the rabbit hole.

supported by the following participants:

THANK YOU ALL, SUPPORTERS!!

Check out the Demon Tracker Trailer and read the Tour posts to find out about the 3rd book in ‘The Council Of Twelve’ series.