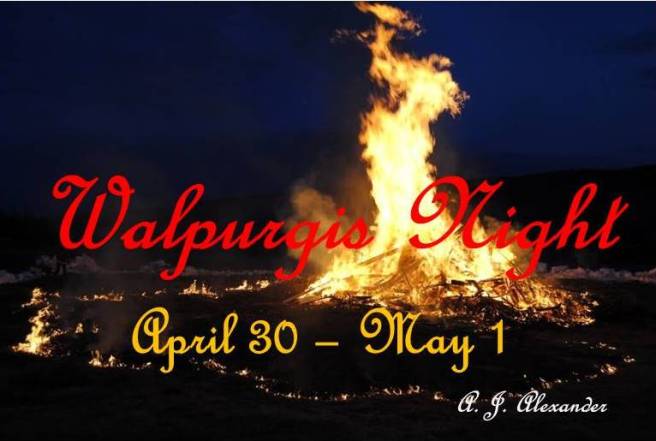 Let’s find out if we can bring some light into a secret that’s hidden in the dark for centuries.

I found two quotes about Walpurgis Night, one as false as the other: 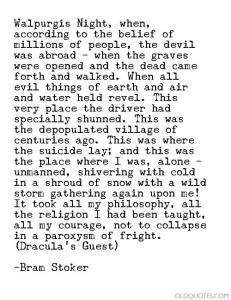 Bram Stoker, the 19th Century Irish storyteller, barely got anything right. Walpurgis night has nothing to do with death, walking corpses and a devil’s dance. But Selena Fox isn’t right either. According to my research, Walpurgis Night and Beltane have two different roots and are just celebrated almost the same time. But let’s find out what I learned:

Walpurgis Night (the English translation of Walpurgisnacht [valˈpʊʁɡɪsˌnaχt]), also known as the Feast of Saint Walpurga, is the eve of Christian feast day of Saint Walpurga, an 8th-century abbess in Francia, and is celebrated on night of 30 April and the day of 1 May.[1] This feast commemorates the canonization of Sant Walpurga and the movement of her relics to Eichstätt, both of which occurred on 1 May in the year 870.[2] (source: https://en.wikipedia.org/wiki/Walpurgis_Night)

Beltane (/ˈbɛl.teɪn/)[3][4] is the anglicized name for the Gaelic May Day festival. Most commonly it is held on 1 May, or about halfway between the spring equinox and the summer solstice. Historically, it was widely observed throughout Ireland, Scotland and the Isle of Man. In Irish the name for the festival day is Lá Bealtaine ([l̪ˠaː ˈbʲal̪ˠt̪ˠənʲə]), in Scottish Gaelic Là Bealltainn ([l̪ˠa: ˈpjaul̪ˠt̪ˠɪɲ]) and in Manx Gaelic Laa Boaltinn/Boaldyn. It is one of the four Gaelic seasonal festivals—along with Samhain, Imbolc and Lughnasadh. (source: https://en.wikipedia.org/wiki/Beltane)

Despite sharing the same date and many customs, there is a distinct difference between Walpurgis and Beltane. At its most basic, Beltane is primarily Gaelic and celebrated on May 1, whereas Walpurgis is Germanic and often celebrated the night before Beltane. If you were able to go back in time however, you’d realize you’re dealing with rural customs, in areas quite often cut off from much contact with the outside world. From that perspective you’d likely see little difference between the two holidays.
The primary difference between the ancient times and more modern history, is Walpurgis has developed a distinctly witchy flavor. Walpurgis in the Middle Ages concerned itself with protecting yourself from or driving away witches.
Today, as the fear of the craft fades slowly into the past, it’s all about celebrating witches. (source: Todd Atteberry of the Gothic Curiosity Cabinet)

According to these sources Walpurgis Night and Beltane are different, Walpurgis celebrating a Germanic Christian Abbess of the 8th Century, while Beltane is much older, of course, and is based on a Pagan Celebration. It started as a celebration of welcoming spring, exactly six months after Samhain (later the Christian All Saints Day.) and turned into chasing away evil.

I found out that Walpurgis Night is celebrated through not only the Germanic part of Europe but Northern Europe as well. (Denmark, Sweden, Finland, Norway, even the Czech Republic, Hungary and Bohemia). It seems, one point in Europe is very much connected to the roots of Walpurgis Night: “Blocksberg,” in the “Harz,” in Germany. It is suspected that Pagans originally tried to find a place where they could celebrate Beltane without being disturbed by fanatic Christians. But of course, a secret never stays a secret if many people guard it. It is told that Christian bigots found the Blocksberg, watched the Beltane rituals and labeled them as celebrating evil, satanic masses, and witches would call Satan to practice dark magic and hold orgies.

All these rumors, of course, let me and many others believe that Walpurgis Night and Beltane are not different at all, but that Walpurgis Night has its roots in the Beltane rituals. It is said that some of these Christians liked and enjoyed the peaceful celebration of Beltane and just found a way to celebrate the feast in a Christian Way, while not much later, the very same Christians burned peaceful Pagan women to death for celebrating rituals that were marked as ‘witchcraft.’

Nowadays of course, in these modern times, the roots and meaning of as well Walpurgis Night as also Beltane have been completely lost. It seems our world hears “bonfire,” “celebration,” “witches.”, “evil” and it turns out into the grotesque glorification of witchcraft without questioning the origin. In many European countries that still remember Walpurgis Night, people light up bonfires, dance, drink and wear silly witch costumes.

I think it is a bit sad that the meaning and the roots of Beltane is mostly forgotten.

Whatever we celebrate now, does have nothing to do anymore with what Beltane meant. Neo-pagans have turned it into some witch celebration.

Nobody knows who Walpurga was and she is just considered another witch.

Once again, this year, April 30, I will remember that centuries ago the beginning of a new season was celebrated and I will smile about the silly turn this celebration has taken.